Well, I finally have something new to report on our ongoing “baby watch”. For weeks now, Ellie has had an enlarging bag. Over this last week-end it looked larger than it has but still no milk to be expressed. This morning when I checked her, she had a tiny amount of clear fluid that I expressed from each of her two teats. Now that is progress! Since she is apparently the slowest donkey on earth when it comes to actually foaling, I have no illusions about it coming tonight. However, I do believe that this change indicates we won’t be waiting for another month. At least I certainly hope not.

I promised you some more general donkey information in the last post. The following details I found on Wikipedia regarding donkey characteristics: Donkeys have quite a range of size. It depends upon the particular breed as well as their management. They range from 31″ (7.3 hands) at the withers to as much as 63″(15.3 hands) at the withers. Their weight ranges from 180 lbs. to 1,060 lbs. Their life expectancy depends upon their care and their access to quality foods. In very poor countries, they generally live from 12 to 15 years. In more prosperous countries, they have a lifespan of 30 to 50 years. Since our 5 range in age from 2 years to 6 years, our children may inherit them some day. I am guessing this won’t be very exciting news to either of them since both of our sons are city dwellers!

Well, that’s the day’s information. I hope to be writing soon with a photograph of Ellie’s new foal rather than this image of her last one. Thanks for hanging in here with me!

Did you know that there were about 41 million donkeys reported worldwide clear back in 2006? Back then, China had the most with 11 million followed by Pakistan, Ethiopia and Mexico. By now, I am quite sure that number has gone up. Gosh, the two babies we purchased last year and the one we have due along with the other two Jennies expecting (we think), we are doing our part!

Since we STILL do not have our new foal born yet, I thought a little donkey history might be in order. Much to my amazement and horror………according to Wikipedia, the gestation period can be as much as 14 months although usually about 12. What a range….from 11 to 14 months. If human mom’s had that kind of range, we would all go crazy waiting!

Believe it or not, the Domestic Animal Diversity Information System listed 189 breeds of ass in June, 2011. Ah yes, the other common name for donkey is ass since the wild ancestor of today’s donkey is the African wild ass, E africanus. Donkeys have been used as working animals for at least 5,000 years. They were first domesticated around 3,000 BC, probably in Egypt or Mesopotamia and have spread world wide since then. As time passed, donkey has gradually replaced ass as the choice of terms. From the 18th century on, this happened due to a tendency to avoid pejorative terms in speech.

All of the above information has come from Wikipedia.org. As we all await the arrival of Ellie’s foal, I thought that I might add donkey info for a while. I have plenty to learn about them. I am particularly interested in the commonality with the horse as well as the differences. Watch for more information in the days to come.

Enjoy the rest of your week-end!

I am writing yet again to continue the “Baby Watch” saga. I keep thinking it can’t go on any longer and I am always wrong. Miss Ellie is bagged up (udder) but is not waxed up. She is huge and getting bigger. She is eating like it is her last meal and groans when she is laying down. But………….no baby. I tried to get a decent angle for a picture this morning with my cell phone but the camera just isn’t good enough to let you see the difference from the rear. When I try to take one from the front she comes immediately towards me for brushing so I can’t get decent a front view. She must be hoping that one of these days I will get her out of this mess. If this foal continues to refuse to enter our world by the week-end, I will take my good camera down there. It is so dusty down there I have avoided taking it down there much.

So, gang, yet again I have no news. I am a bit concerned about the size of the foal but, hopefully, all will go well when the time really does come. I feel badly that I moved Ellie away from the rest of the herd so early. Who knew??? Next time, I will have a better idea of the progress of donkey maternity.

With any luck, I will update you with pictures of a new little jack or jenny sooner rather than later. Gee, I think I have said this before……….. 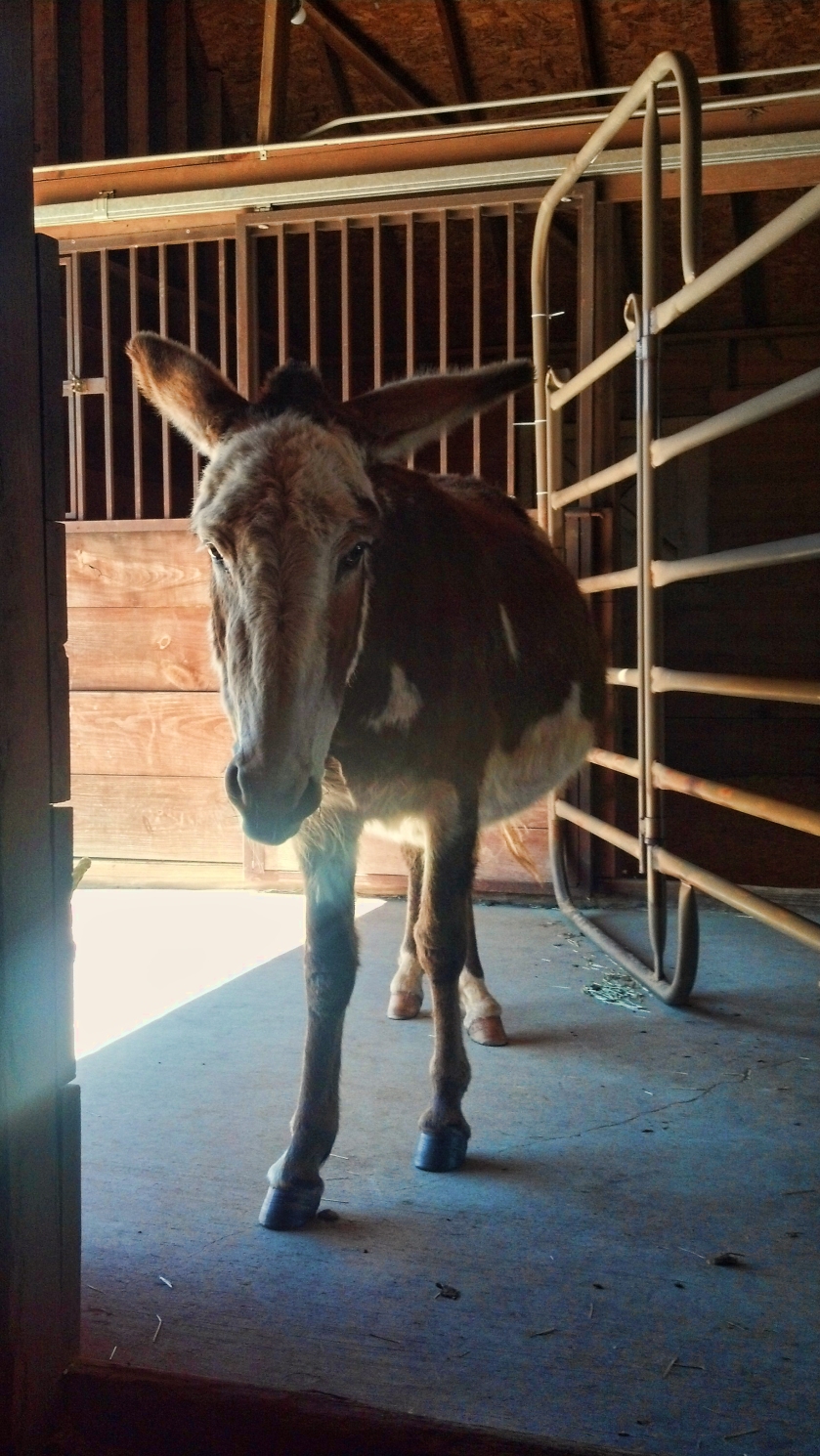 Well, Ellie made it through another night with no little bundle of joy arriving.  I am keeping vigil.  I just saw her lying in the pasture again so down I went to find her very uncomfortable.  She was making little sounds and breathing heavily.  The pressure from what looked like two hooves against her soft tissues was evident from the size of the hoof “lumps”.  She has rolled several times trying to move things into a comfortable position I suspect.  She let me sit down on the ground with her and rub her belly, head and back.    She got up and stood with her head leaned against me as I sat on an upside down bucket.  Her breathing was considerably better on her feet.  It is evident that she is very tired but standing feels better than lying down.  At one point, she moved away but then pivoted on her hind feet in a complete circle to come back to put her head against me.  How I wish I could help her but we just have to wait for that baby to decide it is time.  I finally checked her over for one last time and headed back to the house.  She was lying back down before I got back up to the house so maybe today really will be the day.   The photo is another “phone picture” which only shows 1/2 of that giant belly.  Doesn’t that just make you squirm???    I”ll let you know how things go the rest of today…………..

Wild Mane Photography is officially on “Baby Watch”.  Perhaps I should clarify that I have two horses (mares) and five small (not minis) donkeys (one jack and four jennies).  One of our jennies is ready to foal any day.  Of course, I thought that two weeks ago and I am still waiting.  Miss Ellie is the first of three that should foal in the next few months.  As she got larger and larger, we prepared a special area for her which includes part of the barn and a nice big paddock area where she can still touch noses with all of her buddies but be safe from them when she does finally foal.   I ran additional wire fencing along the bottom of the portable fencing so that when this little foal arrives he or she won’t roll under the fence and end up on the wrong side.  We have a wireless camera installed so that I can check on her during the night by turning on my TV and watching her from the house.  I am getting used to her routine so I hope I will notice when things begin to happen.   I thought today was the day.  She went down in the pasture and stayed for a long time looking pretty uncomfortable.  When I got down there, I could see the impression of a foot/hoof pushing against her skin and her side moving around.  But, as continues to happen, she suddenly looked me, got up and came over and dropped her head in my lap for some TLC.  As I look at my clock, I see it is time to go check the TV.  Most often these animals foal at night and it is almost 1:00 a.m.  I’ll keep you posted!