This week’s class assignment is one that took some preparation and a lot of thought.  We were to study the new Coca-Cola ad campaign, “Taste the Feeling”, and then create two images that could have been used for that campaign.  It was to have the vintage look that Coke is known for but with a modern twist.  It was also to represent my region of the country in flavor.  Since I’m in Texas, it seemed appropriate to create an image using a western dressed model and add a horse or two for good measure.   Here is the first of the two images that I submitted for critique: 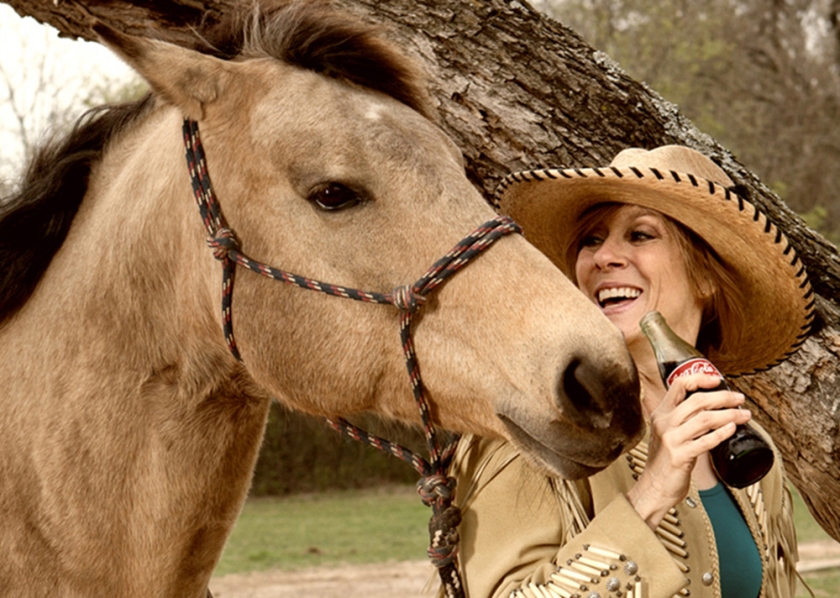 In order to meet the requirements, I went to three stores in search of a glass coke bottle.  I did find some little 8 oz. bottles at Kroger but they certainly didn’t look vintage so I continued my search.  I finally found 12 oz. bottles at a Mexican Grocery Store in Denton, TX.  I also learned that Mexican coke is made with cane sugar instead of the high fructose corn syrup that is used in the United States.  I bought 4 bottles of Mexican Coke along with fresh guacamole and some tortilla chips (not necessary for the assignment but who cares).

Take a look at the horse in this image.  That is Reyanna, my buckskin quarter horse.  During this photo session, she discovered that coke is really good.  Once she discovered that, she wouldn’t leave my model, Julee, alone.  Reyanna was after that coke in this image.  Julee was such a good sport and it was great to catch the interaction between them.  The day was windy and very overcast but so I added a little fill light from a strobe in a strip box.

The second image includes a second horse, Safari.  The interaction created a casual, fun image with coke right in the middle of it.  The images that were used for the real campaign all have a color cast added to give them that vintage look that we have seen over the years in the older Coca-Cola ads.  I added an amber cast that I added to both of these images.  I think it carries the vintage idea but is also subtle.  Here it is:

All in all is was a successful photo session and a fun one.  The horses decided that that hat might taste even better than a Coke and they played right into my hands when they did that. My goal was to make sure that these images looked casual, unposed and showed Coca-Cola as an integrated part of them.

I decided not to use these last two images for my critique but I like them so much that I thought I’d include them in this blog. I love Julee’s hat and that coke bottle really shows up.  The last one showcases Reyanna’s new found love of coke.   She was trying to remove that bottle from Julee’s hand so she could slurp it up!

A special thanks to Julee’ Kula, Reyanna and Safari for being great models for this week’s assignment.  See you next week!  In the meantime, enjoy a Coca-Cola and think about fun times.

I am a Certified Professional Photographer. I am both a portrait and commercial photographic artist. Wild Mane Photography is my company which began in 2004. I love photographing women of all ages, black and white images, drama with a little glamour added and commercial product images.. View all posts by Gloria McDonald